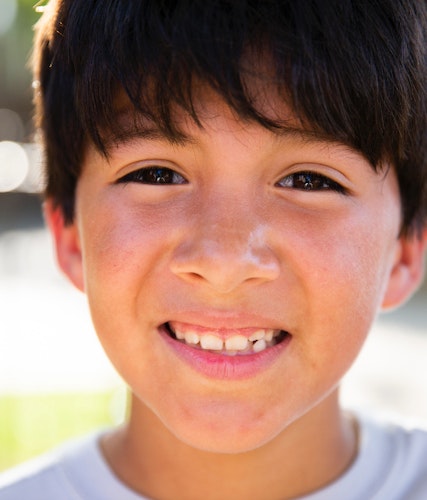 Community Based is where the volunteer Big goes to the child’s home and takes the child into the community (to libraries, sporting or cultural events, the mall, the park, etc.) to spend time together. In a Community Based program, the child’s parent(s)/guardian(s) joins the match relationship—participating in the enrollment interview and monthly match support contacts. Most volunteers serve as a Community Based Big individually. However, our “Big Couple” and “Big Family” expand the experience by involving the volunteer’s spouse/partner and/or own children as active participants in the match. Big Couples and Big Families typically are matched with Little Brothers ages 11 and younger.

For Site Based mentoring, all contact occurs with school personnel, consent, and support during the school day at the Little’s school. Mentors often eat lunch with their mentee, or the match will hang out in the school’s library, gym, computer lab, or other designated space. A School Based program happens at a school. A “Site Based” program occurs at a selected and supervised non-school location, such as at a Boys and Girls Club site, a city library, a corporate partner’s office building, etc. School Based matches may become School Plus matches if desired, giving the match permission to have additional contacts (once or twice a month) outside of the school setting.

mentor2.0 leverages structured, online exchanges to enhance the match relationship between adult mentors and high school student mentees. Weekly written online communications and once-per-month in-person group events follow an established curriculum focused on helping the high school 9th-12th grader do well in school and college preparation and career exploration. This model involves entire classrooms of students at a school, as each student has his/her mentor writing back and forth to one another each week, ideally for all four years of high school. The program currently operates in specific partner high schools in Dallas, Tarrant, and Harris counties.

e-mentoring is our newest program created to connect youth and mentors virtually. With e-mentoring, mentors and mentees, with parent/guardian support and involvement, are asked to join virtually every week and log into BBBS of America’s monitored communication platform at least twice a month, as well. In-person contact between youth and their mentor is not allowed in an e-mentoring match unless at a planned, supervised BBBS match activity. The program follows each of the critical success factors found in other BBBS mentoring options. Its enrollment and match support practices follow those of BBBS of America’s Standards of Practice for Community Based matches. e-mentoring enables youth to have a mentor despite roadblocks of time, distance, and local volunteer availability.

Big Brothers Big Sisters initiatives support people and places outside our traditional programs. We want to see all kids succeed.

Serving the more than 5 million children with incarcerated parents and family members.

Children with 1-2 incarcerated parents are 70-90% more likely to end up in prison. They face cycles of poverty, abuse, academic failure, and dropping out of school. We call these children Amachi from the Nigerian Ibo word meaning, “who knows what God has brought us through this child.” Amachi reminds us some children need one more supportive, caring adult in their lives. We want to see these kids reach their full potential and thrive as productive members of society!

Be an Amachi Big

We host students from nearby schools at a corporate partner’s office.

Companies give back to the community with site-based, sponsored BBBS partnerships. Companies host a group of Littles from a nearby school at their corporate office. Littles meet in the workplace with an employee Big 2-4 times per month, for an hour, during. BBBS staff manages the program on-site, and Bigs and Littles play games, help with schoolwork, tour the office, and share stories.

Mentor a Little alongside your significant other or family members!

Big Couples or Big Families expand the resources available to a Little. Big Couples and Big Families need to be in a long-term relationship of at least two years. This program provides the flexibility of outings with your Little both together and individually. Spend time together and be a support to a local child.

Be a Big Couple or Family

We connect youth and police through mentoring.

Bigs in BlueSM is a national initiative that connects youth with local police. This builds strong, trusting, and lasting relationships that strengthen entire communities.

Be a Big in Blue

We get Littles outdoors through nature-filled events and activities. Bigs Outdoors matches Littles with caring adults who want to pass on their passion for the outdoors. Littles hunt, fish, try shooting sports and water sports, hike, camp, and bird-watch. These Bigs help Littles enjoy the great outdoors! Although the Big Outdoors program is primarily housed in Greater Tarrant, participation in these events is open to matches across Big Brothers Big Sisters Lone Star.

A 2019 report from the Trevor Project shows that just ONE accepting adult can reduce the risk of a suicide attempt by 40 percent.

Our goal is for all LGBTQ youth to have access to a safe and supportive mentoring relationship with a caring adult. One in three children will grow up without a mentor. The Trevor Project estimates that LGBTQ youth make up 5-7% of the nation’s youth, with 13-15% of those in the juvenile justice system being LBGTQ. Compared to non-LGBTQ peers, LGBTQ youth:

Be an LGBTQ Big

We unite faith-based individuals and organizations with Littles needing mentoring.

In many religious traditions helping in your community is part of religious culture. It's a way of living out religious beliefs. This call to service often leads individuals and congregations to mentoring. Faith-based mentors are identify as religious, and take part in the program as part of their congregation or through the BIG HOPE Network.

Be a Faith Based Big

We lean into wisdom and partner with retirement, assisted-living, and senior groups.

Being a mentor is not only for only young adults, but for the young at heart. We hear potential mentors say, “I wish I would have done that when I was younger.” They think they are too old! But, they have decades of knowledge, a wealth of experience, and spare time to share. Retirees, empty-nesters, and grandparents make the best mentors! Generations partners with mentor-rich communities to encourage seniors to volunteer as a Big.

Be a Generations Big

We engage high school students as mentors. Mentoring benefits both teen and kid!

Local high schools near elementary schools create a unique volunteer opportunity. High school juniors and seniors can serve as mentors to elementary students. High School Bigs meet as a group and match with a Little. Our staff runs group meetings and provide structured activities, encourage reading together. They supervise the match relationships and mentor the Bigs.

We serve children of military families by engaging military members as mentor matches.

We recognize that military kids face unique challenges due to the stresses. Military life is often unstable and transient. Military Mentoring serves active duty, veterans, reservists, and National Guard families. We pair these Littles with a Big that understands the ups and downs of military life.

Be a Military Big

We encourage men to step up and mentor boys.

More than two-thirds of children waiting for a mentor are boys. Studies show the lack of a male figure in a boy’s life increases poor school performance and poor life choices. The Real Men Mentor campaign meets men where they are to encourage them to be a mentor that a boy can turn to and emulate as they grow up.

Be a Big Brother

Girls face unrealistic expectations every day. Sisters Rock combines mentoring with opportunities to gain insight on every day issues. This prepares and empowers them to become the best version of themselves, with the guidance and support of a trusted friend—their Big Sister. Topics covered include: healthy relationships, success in school and career, and positive self-esteem.

We share game tickets and once-in-a-lifetime opportunities with matches.

Everything’s bigger in Texas, including our love of sports. Generous individual donations and special partnerships with local sports teams provide Bigs opportunities to share their passion of sports with their Little. We provide tickets to games, sports clinics, special player appearances, and more.

Apply to become a Big and mentor a waiting child in your local community.

Support mentoring financially and help place a mentor in the life of a child.

Enroll your child to be matched with a caring adult mentor in your local community.

Big Brothers Big Sisters Lone Star represents one of the largest combined need areas. Working together, we are lowering costs to serve more local children in each community. Changing the life of a child in Dallas County, Greater Houston, Tarrant County, and West Central Texas is shockingly simple. Whether you choose to become a one-to-mentor for a local child or donate to support mentorship of local children, your contribution will change a life trajectory. Stand with us.